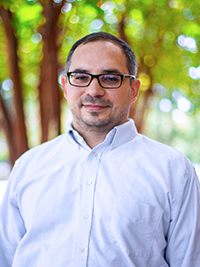 My students and I study the interior of the Earth and other planets on two very different scales:

Large scale: We use satellite magnetic field data to understand the geologic structure and history of terrestrial planets such as the Earth, Mars, Mercury, and also our Moon. Magnetic signatures stored in the crust of these planetary bodies help us decipher how a planet works, just like the magnetic stripes parallel to the mid-ocean ridges helped understand plate tectonics for Earth.

Small scale: Knowledge of the shallow subsurface provides valuable information for a variety of disciplines including geology, engineering, water management, environmental studies, archaeology, and energy resources. My students and I use electrical resistivity tomography and ground-penetrating radar to create two- and three-dimensional images of the subsurface without the need to dig holes.

Mars’ Terra Cimmeria / Terra Sirenum region, located along the antimeridian in the southern hemisphere contains crustal magnetic fields that are at least an order of magnitude stronger than Earth’s crustal fields. My collaborators and I are trying to understand what geological process created these strong fields and how these processes are related to the Martian dichotomy – the strong difference in elevation between the Martian southern highlands and its northern lowlands. For our study, we use NASA’s ongoing MAVEN satellite mission.

I have been developing an open-source ground-penetrating radar software for both two-dimensional and three-dimensional subsurface investigations. See installation instructions for this free software.

My Master’s student Marcus Pacheco has been using electrical resistivity tomography and ground-penetrating radar to image the base of a rock avalanche deposit close to Royal Arches in Yosemite Valley. The goal of his study is to find the true extent of this partially buried deposit stemming from a rock avalanche about 14,000 years ago. The resulting extent and depth will give us insight into the dynamics of rock avalanches in Yosemite Valley and into the sedimentation history shortly after the last glacial maximum.

This is a list of selected publications and extended abstracts of the last few years. For a full list, please see my CV. (* represents student first author)