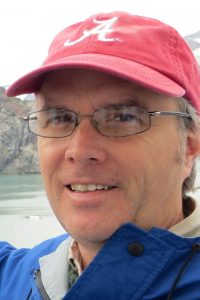 My research focuses on developing and applying proxies relevant to reconstructing paleoclimate variation, often in the Pleistocene and Holocene, but sometime with more ancient fossils. Methodologically, I often measure isotopic and elemental data by microsampling carbonate skeletons. This may include mollusk shells, coralline algae, and fish otoliths. I have a particular interest in reconstructing how climate and environmental factors influence organisms, including humans. This approach often necessitates the investigation of the life history of organisms that may act as paleoclimate indicators and the use of archaeological remains as a source of paleoenvironmental data.

Our group has projects in the Atlantic, Pacific, and Gulf Coast of North America, Central America, Pacific South America, Greenland, and Antarctica. We assess past water temperature, rainfall/flood patterns, El Niño variability, and sea ice and glacier flux. Most recently, Ph.D. candidate Christine Bassett (MS, 2016) is analyzing modern and ancient clam shells from the Aleutian Islands. Her dissertation is a key part of the Unalaska Sea Ice Project with colleagues at Boston and Western Washington Universities. The goal of the project is to determine past variation in seasonal climate that may be related to the former extent of sea ice, and how such change affected people in the past. You can learn more about it on this website: http://www.bu.edu/articles/2017/dutch-harbor-middens/

Christine Bassett and I are developing stable nitrogen isotope records in Pacific abalone from the Chanel Islands, California as a possible upwelling and productivity proxy.  Prior to that, I conducted upwelling-related research in coastal Peru for a number of years with several students and colleagues. Miguel Etayo (Ph.D. 2010), Christie Jones (MS 2010), and I measured radiocarbon profiles in various species of mollusks from the coast of Peru to better understand past and present upwelling and radiocarbon reservoir effects associated with El Niño/Southern Oscillation (ENSO).

Hillary Sletten, (Ph.D. 2016) developed and applied climate/environment proxies in coralline algae. She was awarded a fellowship to conduct research in Panama through the Smithsonian Tropical Research Institute where she collected rhodoliths and performed controlled mesocosm experiments. She also analyzed geochemistry in encrusting algae from Greenland to detect glacier melt. Sarah Olmstead, a current MS student, is beginning analysis of rhodoliths from the Flower Garden Banks to better understand how such reefs form and are impacted by human activity and sea level rise. We also hope to use algae geochemistry from the Aleutian Islands to measure the local radiocarbon reservoir effect, which will improve age-dating in the region.

We work with colleagues across North and South America using mollusk geochemistry, growth, biogeography, and related techniques to study shell middens. Our goals are often to assess past human subsistence strategies, season of occupation and resource use, site formation processes, and other questions relating to archaeology.